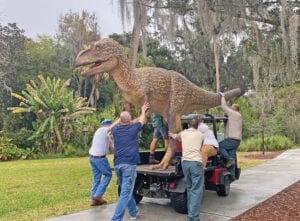 Many hands worked together to install the Dinosaur Invasion Exhibit, now on display at Leu Gardens Jan. 18 – April 18. COURTESY OF LEU GARDENS

The Dinosaur Invasion Exhibit, created by Guy Darrough, features species of dinosaurs ranging from 14 inches to 33 feet. They include members of the genera Daspletosaurus, Heterodontosaurus, Parasaurolophus and more.

Darrough, a self-taught and highly accomplished fossil collector, preparation expert and illustrator, according to his website, has worked in paleontology and related areas for 40 years. He has collected and studied fossils from a plethora of different parts of the world including all over the United States, Canada and Morocco.

Darrough’s parents were both hunters; they traveled out west in pursuit of deer, antelope and more, which is where Darrough first learned to love the outdoors. He said he picked up rocks and fossils as they went, and one of his favorite things to do was visit the local museums.

In the past few years, Darrough has still pursued his passions in paleontology. He has discovered over 20 animals that are new to paleontology, and he did all of that without a college degree. 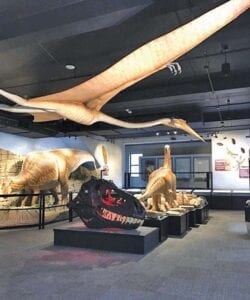 “I met a geologist when I was 16 or 17 that kind of showed me the ropes, but the rest of my work was mostly self-taught and sprung from curiosity,” said Darrough. “I did all of this on my own time without anyone paying me to do it.”

The dinosaurs in the exhibit are made in the beginning out of Styrofoam. They are then covered with clay, and unique details like the skin are added before they are molded and put together to form a model. The final dinosaurs, in their complete and realistic forms, are made of resilient fiberglass to protect them from the elements and animals like birds and squirrels.

Darrough said the dinos are then finished off with painting from “one of the best dinosaur painters in the world,” Shane Foulkes of Imperial Missouri.

If Darrough has another person to help him with the process, he said he can usually finish a 30-foot dinosaur in about eight months. Darrough’s company, Lost World Studios, features realistic and beautiful works of art in the form of both a botanical garden exhibit and another with dinosaur eggs and babies.

Darrough said he approached the town of Ste. Genevieve, Missouri, about his collections. Ste. Genevieve’s outdated museum had opened in 1935, so they obtained a bigger building in the town square. Darrough and his exhibit crew “made everything” for the new Sainte Genevieve Museum Learning Center, which is hosting 95% of his collections.

In the future, Darrough said that of the many things he could do, he wants to have a few ducks and some turkey.

“I don’t want to eat them,” he said, laughing lightly. “I want to have them running around the property and I want to watch them. It’s oddly calming in the middle of all this worldwide conflict. They’re just like little dinosaurs.”

In his free time, Darrough likes to collect all types of geological curiosities and do shipwreck work on the rivers. Darrough also credits that he wouldn’t have been able to do any of the work that he does without his wife of 50 years, Doris.

“My wife puts up with everything I do, and she is responsible for making everything in my professional and business career come together,” said Darrough. “The things I love to do wouldn’t be the same without her and her help.”

Admission to the Dinosaur Invasion Exhibit is included with a daytime garden admission. The dinosaurs will be available for viewing at Leu Gardens through April 18 before they next appear at Fairchild Tropical Botanic Gardens in Coral Gables, Florida, May 1 – July 31. For more information on Darrough and his work, visit his website at lostworldstudios.com.